The pro-wrestler, who hails from Manchester, connected with our charity after hearing about our WWE super fans via social media. The star kindly offered his support, hosting a virtual meet and greet for ten of our charity’s biggest wrestling enthusiasts. 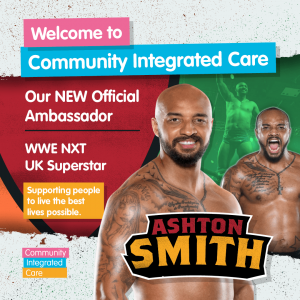 Ashton, who competes weekly at the BT Sport Studios in London with tag team partner Oliver Carter, was impressed by the passion and excitement of the fans, who hailed across England and Scotland. Bringing together adults of all ages who have a range of support needs – such as learning disabilities, autism, mental health concerns and dementia – the session showed that WWE is a passion that touches many lives.

With exclusive access to their hero, the session provided a perfect opportunity for the participants to get top tips and backstage stories from Ashton, and to have fun recreating the routines of pro-wrestling stars. Highlights of the session included Oliver Thomason practicing a wrestling promo with Ashton that dared the superstar to step into the ring with him. A love for the sport was powerfully brought home by Yvonne Dewey, who shared her memories of watching the sport throughout her lifetime – including seeing legends of British wrestling perform in Brighton, as a young child, with her father.

The special experience inspired Ashton to accept an invitation to become an Official Ambassador for Community Integrated Care- an honour shared with the likes of Manchester City and Germany star Ilkay Gundogan and several leading Super League rugby league stars.

“It was such a privilege to support the amazing work of Community Integrated Care and to meet the people they support. To see them wearing their WWE t-shirts, showing off their posters they had designed, and talking about their passion for wrestling was inspiring.

I know that the charity has many more WWE super fans, so I am excited to support more experiences in the future. I’m so proud to become an Ambassador for the charity and to support their life changing work.”

Oliver Thomason, who participated in the call said:

“It was amazing to meet the one and only, Ashton Smith! Ashton is a hero of mine. I love to watch him in WWE NXT UK and I even play as him on my Xbox. I’d like to say a big thank you to Ashton for taking the time to meet us and supporting Community Integrated Care.”

“It was incredible to see how excited everyone was to meet Ashton. They have not stopped talking about the experience and have all become his number one supporters! This session provided an extraordinary moment for the people we support, which they will remember for the rest of their lives.

We’re grateful that Ashton has become an Ambassador for our charity. Our Ambassadors, like Ashton, play an essential role in shining a spotlight on social care and creating magical moments for the people we support. We are looking forward to creating more experiences together in the future.”