Family members of Mike Calvert, who was supported at Rydal Mount in Cumbria, praised staff for their fantastic care, in a touching tribute in their local newspaper, the News and Star. 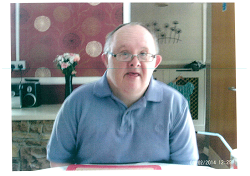 Mike, 49, had been cared for by his mother up until two years ago, when his dementia worsened and she decided he needed professional support. The family petitioned the NHS to move Mike to Rydal Mount so that he could be close to his friends and family, which attracted an incredible 115,000 signatures.

Staff at Rydal welcomed Mike to the care home 18 months ago and since then, had worked hard to ensure his support is personalised and built around his personal interests and needs, hobbies and interests.

Sadly Mike passed away on 1st August, where he was surrounded by his family and the staff team who cared for him.

Staff at Rydal Mount were really touched at the personal thanks that Mike’s family expressed to their local newspaper.

Mike’s mother, Marylin Calvert, said: “They looked after him to the end. They were just like angels up there with him.”

His sister, Jennifer, also shared her gratitude and said: “Our thanks go to Rydal for caring for the most precious thing in our lives in a way that we would of. From the moment he went to the moment he died, they treated him with friendship and dignity and care and love, always remembering the person that Mike was, always joking with him right to the very end.”

Service Leader for Rydal Mount, Janice Coates, said: “We will miss Mike so much. He was such a vibrant, humorous man and loved by all. We are privileged and honoured to have supported such a happy, well thought of young man. I am very proud of the staff team who gave him such great life experiences.”

We would like to express our condolences to Mike’s family, especially those who had the pleasure of meeting him. He will be very fondly remembered.