Community Integrated Care’s has been recognised as one of Britain’s very best, after winning two top accolades at the Institute of Internal Communications (IoIC) Awards. 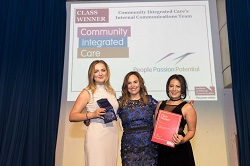 The Best In-House Team accolade recognised a host of successes by the pair in 2015/16, including their creation of the charity’s first ever Internal Communications and Engagement Strategy, following a major internal communications and engagement review that they delivered. The team have successfully introduced a host of internal communications platforms to the organisation, including a Microsoft Office 365 intranet and leading enterprise social network, Yammer; a new internal magazine; and a range of employee voice and reward and recognition initiatives.

Their ‘Best Live Event: Internal’ award recognised their creativity in launching Yammer. They developed an exciting event which created a network of champions for the new platform and built anticipation within the charity for the launch of the product. Yammer has been core to the charity’s internal communications efforts, supporting better connectivity and information sharing across the organisation.

Judges at the awards praised the team, stating: “From small beginnings and with few resources they have developed a fully operational Internal Communications team, with channels and outcomes that you’d expect from a longer established, larger function.” Their success has seen the charity placed alongside a host of national brands, including: Muller, Nationwide Building Society, LV and Barclays.

Danielle Chan, Head of Customer & Stakeholder Engagement, says: “For the people we support to lead the best lives possible it is vital that our colleagues are well informed and feel engaged with our charity. To receive such positive feedback for our creativity and accomplishment in delivering this was a tremendous honour and something that we are hugely proud of. It is an amazing achievement for our charity and small team to be placed alongside Britain’s biggest businesses.”