Community Integrated Care has today (9th July) launched a ground-breaking report that has found that many frontline social care workers are undervalued by as much as 39% – nearly £7,000 per year – in comparison to their peers in equivalent positions in other public funded sectors. With the social care sector losing more than 34% of its employees every year and having 112,000 vacancies presently, this research brings into stark focus the roots of an unprecedented workforce crisis.

Our report, ‘Unfair To Care’, is the first ever independent analysis of the frontline Support Worker role – providing in-depth evidence that frontline carers receive an unjust deal in comparison to other public funded industries and breaks the stereotype that social care is a ‘low-skilled’ sector. 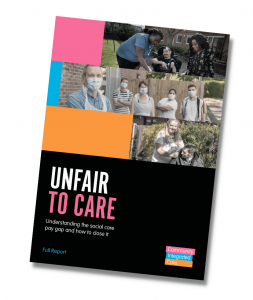 This bombshell analysis has led to calls for the Government to provide an immediate and fair pay rise to social care workers and deliver a robust social care sector people plan, which ensures long-term parity of pay with other public funded sectors. The full report can be found at: www.UnfairToCare.co.uk

The average pay for Support Workers in England who assist people to live independently in the community is £17,695 or £9.05 per hour – 45p per hour below the Real Living Wage.

Community Integrated Care commissioned Korn Ferry, the global experts in job role evaluation, to undertake an in-depth analysis of this position, objectively assessing its true value across sectors. Their researchers found that roles with equivalent scope, complexity and accountability within other public funded sectors are, on average, paid at £24,602.

The gap is even greater in the sector’s counterpart – the NHS. The average take home pay for equivalent jobs in the NHS is £25,142, meaning that many social care workers would need a 42% pay rise, an additional £7,447, to have parity with their NHS peers.

The analysis demonstrates that the role of social care workers has changed beyond recognition in the past decade, as the sector increasingly supports people with highly complex health and care needs. With frontline colleagues commonly supporting and understanding complex medical and behavioural needs – from dementia to acquired brain injuries, having innate and rare personal gifts, and taking an exceptional level of personal accountability, the position was found to be significantly undervalued.

This data demolishes the crude assessment by Home Secretary, Priti Patel, that social care is a “low-skilled” sector. It demonstrates that Support Workers frequently have the same or a greater level of skill and accountability as professions such as healthcare assistants, police community support officers, and senior teaching assistants.

The report outlines that the local authorities who fund social care and the social care providers they commission are at financial breaking point and cannot deliver increased pay without greater investment and progressive reform from central government. It has strengthened calls from across the sector for the Prime Minister, Boris Johnson, to live up to his promise, which is now almost two years old, of “fixing the crisis in social care once and for all.”

This research has drawn support from across the social care sector and political sphere. The report includes contributions from Oonagh Smyth, CEO of Skills for Care – the strategic body for workforce development in adult social care in England, and former Care Minister, Phil Hope, as Chair of the Future Social Care Coalition – a movement led by former health and care ministers and leading industry bodies, championing workforce reform.

A Call For Action

Unfair to Care outlines astonishing personal crises – such as mental health challenges, homelessness, family breakdowns – that are played out across the sector, due to low pay. It also shows how the turnover of the sector impacts upon the quality-of-care that people receive – showing that the loss of a much-loved Support Worker can be felt like a bereavement to people who access care.

The report clearly articulates that pay is only part of the solution needed to both fix the employment crisis that is engulfing a sector that has 112,000 vacancies and to extend the societal impact of social care. Its recommendations include a significant expansion of training and development options, a focus on creating routes to career progression, the introduction of professional registration, campaigns to raise the esteem of the sector, a focus on diversity and inclusion, investment in mental health support, and reward and recognition strategies.

An Issue of Strategy and Focus, Not Possibility

Mark Adams, CEO of Community Integrated Care, says: “The moral case for investment in social care and its workforce has, sadly, been ignored for years. This research now provides cold hard facts, which surely cannot be ignored by the Government. Our research proves that in other related sectors, many frontline Support Workers would be getting paid at least £6,907 more per year, and almost £7500 within the NHS. This is immoral, illogical, and cannot be justified.”

“This is a significant challenge, but it can be fixed – firstly, by recognising the £46bn contribution that social care makes to the UK economy annually, and also delivering progressive reforms that improve efficiency and quality of live through delivering joined-up services, reducing the burden on family carers and embracing innovations. All evidence points to overwhelming public support for investment in the sector. This is an issue of strategy and focus, not of possibility.”

“It is a matter of national shame that social care workers, who provide such an invaluable service to society, are in such desperate circumstances. Throughout the Coronavirus pandemic, frontline workers have risked their health to protect those who need their support. Most have done so below the poverty line and without the basic safety net of sick pay. This cannot continue.”

Oonagh Smyth, CEO of Skills for Care, says: “Community Integrated Care have brought together a wide range of data and thinking, including from our Adult Social Care Workforce Data Set, to make the clear case that our 1.5 million workforce are highly skilled professionals, who deserve to be recognised as such as we enter a period of promised reform.”

“We believe that policies to reform adult social care will not be successful unless they address the needs of the workforce, through a social care people plan and comprehensive workforce planning, underpinned by data and an understanding of our workforce now and in the future.”

Phil Hope, Co-Chair of Future Social Care Coalition and former Care Minister, says: “Unfair to Care provides essential evidence in the case for urgent investment in the social care sector, to deliver workforce reform and fair pay. It cannot be right that people in social care positions are so vastly underpaid in comparison to their equivalents in other public funded sectors, despite the significant skill and accountability of their roles.”

“It is time for the Government to respect, reward and regulate, to support all those working on the ‘forgotten frontline’. It has never been clearer that they warrant and deserve a fair deal.”