Thorney Croft care home will be enjoying a new indoor seating area to promote the relaxation and activity for the people we support, thanks to the generosity of Stranraer Football Club’s fans. 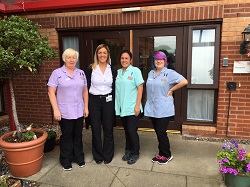 Six staff members from Thorney Croft were invited to host a fundraising collection at the club’s recent game against Scottish Premiership giants Motherwell.

The visit was arranged by family member, Kay McHaffie, who contacted the club to ask for their support. The Blues invited fundraisers inside the ground to meet supporters, who generously gave almost £400. The money will go towards purchasing a comfortable new seating space in one of the households in the care home, for the people we support to enjoy.

Thorney Croft is based in Stranraer and the home provides specialist support to 60 people, including people with dementia.

Hayley Mann, Manager of Thorney Croft, says: “We were taken aback by the support shown from the fans of both Stranraer and Motherwell. The fans were so friendly and keen to give back to our dementia care home. To raise almost £400 in one day is an amazing achievement – it will mean that the people we support will have an even better place to live.”