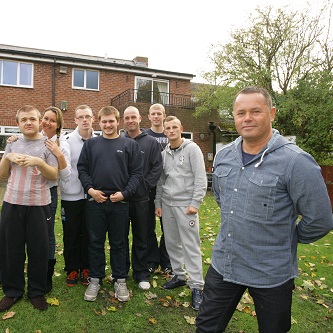 A person-centred approach to voting

Services from across Community Integrated Care have been engaging the people they support on the General Election – helping them understand how politics affects their lives, what voting means and what the different parties stand for, so they can make an informed choice about whether or not they want to participate in it.

In this blog post, Paul Nesbit, Manager, and Ryan Soulsby, Support Worker, from our Spencers Villa supported living service in the North East, explain how they have enabled the people they support to take part.

Spencers Villa is a specialist service in Durham that supports three young men with Autism to live independently in their first own home.

“In the run-up to the election, the Quality Team at Community Integrated Care shared special resources and gave lots of advice and encouragement about supporting people to vote, which has been brilliant. However, at Spencers Villa, our plans for voting actually started much earlier this year – when we received a leaflet from our local Labour Party candidate.

This started a conversation where one of our Support Workers, Ryan, explained that at the age of 20, this would be his first ever General Election. He asked the people we support, Paul, Gavin and Anthony, if they had ever voted before – he found that they too, like him, had only become eligible to vote this year. As we discussed this as a team, we found that this would be the first time for some of our other young colleagues too.

What a brilliant opportunity! The people we support could choose to take a big step as young adults and citizens of this country, by voting, at the same time as many of the people who support them too. So, we all decided to learn a bit about politics and voting together!

From the outset, the people we support all agreed that they wanted to vote. From this point on, we’ve been doing everything we can to help them understand politics and the election.

As a staff team, we spent a lot of time gathering information in their preferred methods of communication. This included downloading Easy Read Manifestos of the various political parties, using PECS (Picture Exchange Communications System) to support discussions, as well as asking local candidates to create One-Page Profiles.

This has been a real passion project for our team, who have demonstrated great initiative, creativity and commitment. Their hard work has all been worth it! The people we support have independently decided who they want to vote for and are looking forward to having their say at the General Election. I’m proud to see them take this big step in their lives.”

“I’ve had a big role in supporting the guys to prepare for voting, and it has been brilliant.

My first step was supporting them to register. Paul and Anthony were already on the Electoral Roll, but Gavin hadn’t been registered previously. I assisted him to do this, using the government’s online registration system. This was really easy to do, and it really added to his sense of anticipation about taking part.

I then gathered relevant information for the guys and ensured that it was accessible to them. I spent some time researching the local candidates around Durham, which I converted into easy read and accessible formats. I also downloaded accessible information on the different party’s national policies, using tools like their Easy Read Manifestos.

As a service, we regularly use One-Page Profiles in our support. They really give a sense of who people are and what is important to them, so we thought it may be useful to ask the local candidates to complete them. Fantastically, many did. It was great to see their enthusiasm for making themselves and politics accessible to people who access care and support.

This has been a great project to be part of. It’s been a privilege to see the people we support learn about politics and get excited about taking part in the election. It’s also been brilliant for me personally too, helping me learn more about local and national politics. We’re all looking forward to casting our vote on May 7th!”

The team at Spencer’s Villa were shortlisted at the 2014 Great North East Care Awards, in the Care Team Award category.