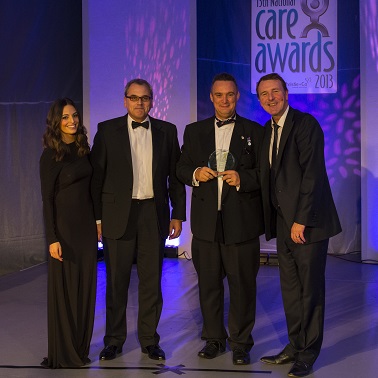 2013 came to a close with more award success for Community Integrated Care, with five outstanding colleagues representing the organisation at the prestigious National Care Awards, held at the London Hilton Hotel on 29th November.

Graeme Marsden, Team Leader at Trumans Lane, a supported living tenancy in the Wirral for three young men with autism, scooped the top honour of ‘Special Needs Manager’ Award. The awards panel recognised his outstanding work in setting up a first ‘own’ home for the three men.

Graeme has helped to transform their lives, carefully creating a specially tailored home environment and delivering support which has allowed the young men to flourish. Judges commended Graeme for his ‘compassion’, describing him as demonstrating ‘genuine leadership’.

The National Care Awards are the UK’s flagship care award event, recognising excellence of those working in the sector. Winners at the glittering ceremony, held at London’s Hilton Metropole Hotel on 29th of November, were presented with their trophies by cricket legend Phil Tufnell.

Also representing Community Integrated Care on the night was Chief Executive, Neil Matthewman, who was shortlisted for the ‘Care Personality’ Award. Runcorn-based care home St Lukes was represented by Manager Sue Ashcroft and Head Housekeeper Monika Golenska, who were up for the ‘Care Manager’ Award and ‘Care Housekeeper’ Award respectively. Alongside these and also competing for the ‘Special Needs Manager’ Award was Marek Dziankowski, Team Leader at Street Lane, a supported living tenancy for five young men with autism and learning disabilities.

Graeme Marsden says: “It was an incredible honour for me to receive this award. In Trumans Lane, my colleagues and I have worked hard to create the perfect first home for the people we support. I’m so proud to have received this accolade, but my greatest honour has been to help the three amazing people we support to lead very full, happy and independent lives.”

Community Integrated Care’s Regional Director for North West and Cheshire, Jill Lucock, says: “Graeme works with enthusiasm and dedication to offer the very best support possible to the tenants at Trumans Lane, and he inspires his team to do the same. He truly deserves to be recognised as one of the care sector’s leading managers.”