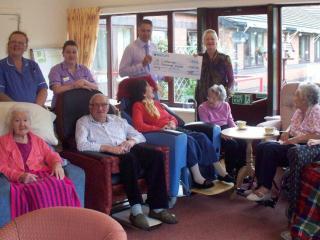 Staff and residents at St Catherine’s Care Home in Nantwich were this month delighted to receive a £1000 cheque from local brewery, The Woodlands Brewing Company, after being named as the company’s Charity of the Year.

The generous donation was raised through tickets sales to the Brewery’s annual fundraising Beer Festival in Stapley, Nantwich, which saw hundreds of local residents flock to enjoy two days of beer tasting, food and entertainment from well-known Cheshire

Brewery owners, Glenda and John Skeeping, selected St Catherine’s as the recipients of the monies raised to show their appreciation for the care staff at the home had given to their elderly relative.

Carolyn Penfold, Home Manager at St Catherine’s, said: “The Woodlands Beer Festival has its inaugural year last year and it was a fantastic success, so when Glenda and John told us that St Catherine’s had been chosen as their named charity for the 2012 event, we were over the moon!”

“We were staggered by the amount donated to us and after lots of discussion, the money raised will go towards creating a sheltered decking area with wheelchair access and a replacement cherry tree, so all our residents can enjoy a breath of fresh air, whatever the weather.”

“On behalf of all the residents and staff at St Catherine’s, I would like to extend our sincere thanks to Glenda and John, and we look forward to welcoming them back to St Catherine’s in the near future to show them how their kind donation has improved our service and the lives of the people we support.”