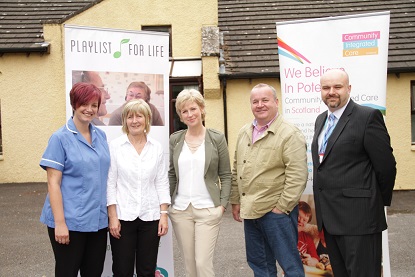 Carlingwark House, a Castle Douglas care home, has again been recognised as one of Britain’s best, after being shortlisted for four of the care sector’s top honours.

Carlingwark House supports thirty people, many of whom live with dementia. The home has received widespread recognition in recent years – including featuring in high-profile care sector conferences and television news – for its ambitious approach to support, and the effective partnerships it has developed with local community groups.

Kelly Henderson, Team Leader at the home, has been shortlisted for Resident Engagement Award at the National Care Awards, as well as the Creative Arts Award at the 3rd Sector Care Awards. In 2014, Kelly was named ‘Carer of the Year’ at the Scottish Care Awards.

Kelly has been shortlisted for her efforts to build thriving professional partnerships at the home, and her use of ambitious new methods of care and support. She has pioneered the use of Playlist for Life, an innovative approach to music therapy for people who live with dementia, which was developed by the broadcaster Sally Magnusson. In June, Kelly and her colleagues welcomed Ms Magnusson to their home, who commended them for their person-centred approach to support.

Kelly is the home’s Link Worker with the NHS Continence Advisory Service, and works in close partnership with the NHS Dumfries & Galloway IDEAS (Intervention for Dementia: Education, Assessment & Support) team. These partnerships see her develop new ways to improve the wellbeing of residents at the home. She is also a Dementia Ambassador, a role established by the Scottish Social Services Council to promote excellence in dementia support and learning opportunities in her local area.

Carlingwark House is up for a further two accolades at the National Dementia Awards, which are endorsed by the Journal of Dementia Care. Mandy Kennedy has been shortlisted for the ‘Best Activity Coordinator for People Living with Dementia’. This recognises her creativity in enabling residents to lead full and active lives. Her efforts include supporting residents to enjoy an eight week art course and arranging IT equipment for residents after securing a grant from the Winifred Kennedy Trust, so they can enjoy using the internet and connect with family members online.

It has also been shortlisted for the Best Dementia Continence Care Award, an award it has won for two consecutive years previously. The home adopts a person-centred approach to continence support – promoting dignity, wellbeing and independence. It also works in close partnership with the Care Inspectorate and NHS teams, to share and learn from leading approaches for continence support. Last year the home supported the development of a Care Inspectorate guide that promoted best practice in continence support, which was shared with every care home in Scotland.

Nominees and representatives of Carlingwark will be attending the various award ceremonies, which take place in Birmingham and London, in November and December.

Shirley McTier, Home Manager of Carlingwark House, says: “At Carlingwark, we are committed to promoting the dignity, independence and wellbeing of the people we support. To achieve this, we focus on being ambitious, working in partnership with leading groups, and adopting best-practice approaches for care and support – these nominations recognise our success in achieving these aims. I’m so proud of our team for being shortlisted for these prestigious honours, and I’d like to wish them lots of luck for the big events.”