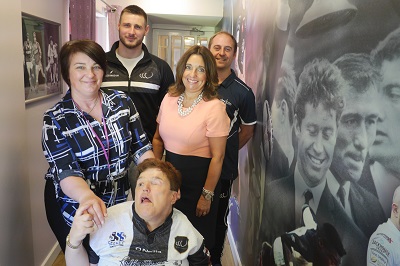 d representatives of the club.

People supported at Glenwood and their support staff are dedicated Vikings fans, so they chose to celebrate their shared passion with a space that showcased the triumphs of their much-loved club, as part of a significant refurbishment of their home. People supported at Glenwood often go to Widnes Vikings games, and also participate in weekly sports and activity sessions with the Vikings, as part of our partnership with the club.

Karen Hayes, Service Leader for Glenwood, took BBC Radio Merseyside on a special tour. In the interview we hear about how the walls are lined with photographs of past and present players, including a large-scale mural and a photo of the residents and players on the pitch at one of their matches – a chance in a lifetime for the people supported at Glenwood!

The Widnes Vikings themed room brings together wonderful photographs of legends of the club, such as Frank Myler, Kurt Sorensen and Martin Offiah, as well as the home’s favourite players from the current team, in a stunning design. It also includes a host of Vikings memorabilia, including a signed shirt donated by the team and a match ball from the famous 1989 World Club Challenge win. The room was developed with the support of Widnes Vikings, the Widnes RL Museum, and the Liverpool Echo and Weekly News, who all generously donated photographs from their archives.

Former Player Eddie Cunningham, now a Mental Health Ambassador for Widnes Vikings and Halton CCG (and whose son has learning disabilities), told the radio station how important the new Vikings area would be for people being supported, saying: “It’s putting a smile on people’s faces, and it makes you feel that little bit better. This is a stroke of genius!”